Copper in History, Its Use Throughout the Human Life

Copper is believed to have originated from Cyprus, where Romans used to mine it from their rich copper mines. Its name (copper) originated from the Latin word Cuprum (CU). In ancient alchemy and mythology, copper was associated with protection of the goddess Venus and Aphrodite. This was mainly due to its radiant beauty and origin from the Island of Cyprus, which was considered sacred. History on usage of copper is best-understood when studied under the 3 stages of its use throughout the human life namely, Copper Age, Bronze Age, and Antiquity and middle ages. But first, let us look at several copper facts that accounts for its widespread use in history of mankind. 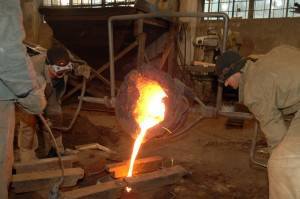 Now let us examine uses of copper under the 3 stages of human life.

Its Uses During Copper Age

History of copper metallurgy is believed to have evolved in the following sequence:

Evidence tells that in southeast Anatolia, all these metallurgic techniques appeared almost simultaneously at the onset of Neolithic era (7500 BC). However, just like agriculture evolved independently in various part of the universe (including China, Pakistan and America). Copper smelting developed at different times in different regions of the world.

Copper was discovered in China around 2800BC

Central America about 600 AD, and W. Africa nations about ninth or tenth century. Investment casting was discovered between 4500 – 4000 BC in S.E Asia, and carbon dating has provided evidence of copper mines at Alderley Edge, Cheshire and UK around 2280 – 1890 BC.

Otzi the Iceman, a male who dates back to between 3300 – 3200 BC, was found with an axe with a 99.7% pure copper. Furthermore, high levels of arsenic in his hair pointed to his engagement in copper smelting.

Copper in History - Its Uses During Bronze Age

The Bronze age began in S.E Europe about 3300 BC, in N. western Europe about 2400 BC and ended with the onset of Iron Age between 2000 – 1000 BC in the near East, and 600BC in the Northeastern Europe. The transition period from Bronze to Iron Age was commonly called Chalcolithic period (Copper-stone), with copper tools being used together with Stone tools.

Copper in History - Its Uses During Antiquity and Middle Ages

In Greece, copper was locally called chalkos (χαλκός). It was an essential metal for Greeks and Romans. In Greek alchemy and mythology, Venus and Aphrodite represented copper. The seven heavenly bodies known to ancient Greeks were associated with the 7 metals known in antiquity, and copper was assigned to Venus. Britain first use of Brass happened between 3rd and 2nd century BC. In North America, extraction of copper started with marginal working by Native Americans. Native copper is said to have been extracted from mines on Isle Royal using stone tool around 800 – 1600 BC.

Around 1000 AD, copper metallurgy was fast flourishing in South America especially Peru; it spread at a much lower rate across other continents. In particular, copper made burial ornaments from the 15th century have been discovered, but commercial use of metal did not begin until the early part of the 20th century.

With an estimated yearly production of about 15,000 tonnes, Roman copper extraction and smelting hit unsurpassed scale, until the onset of Industrial Revolution.In ancient India, copper was widely used in their holistic medical practice (Ayurveda) to manufacture surgical equipments. Early Egyptians used copper to sterilize wounds and later on to clear headaches and itching.

The Baghdad Battery, made with copper cylinders soldered to lead, dates as early as 248 BC to AD 226 and closely resembles the galvanic cell. Claims have been made that it’s the earliest battery ever, but these have not been validated.

Copper production came into its own during the Industrial Age, when new technologies made it easier to mine and process copper than ever before. Along with iron and steel, large blast furnaces and reverbatory furnaces could be used to process copper in greater and greater quantities.

According to the Superfund Research Program at the University of Arizona, copper ore can contain as little as 1% copper, and requires significant processing to turn it into pure (99.99%) copper.

Throughout most of history, the only way to process copper ore was through smelting, or applying heat to the ore to extract impurities.

The development of smelting furnaces meant that copper mines could go from smelting 560 tons of ore in 40 weeks to 230 tons every week by 1794.

This much ore could produce 18 tons of pure copper and used up to 315 tons of coal in 38 furnaces, according to records from the Mines Royal at Neath Abbey in Wales.

The downside to producing copper in such quantities was that the sulfur in the copper ore polluted the air, creating fumes of sulfur dioxide around refineries. Modern furnaces capture the gas instead, which can be turned into sulphuric acid for use in fertiliser production.

In the 20th century, copper refineries introduced a new method known as hydrometallurgy. Instead of heat, this technique uses liquid to extract the copper from the ore.

This approach is considerably more environmentally-friendly and produces fewer byproducts. By 2001, up to one fifth of the world’s copper was processed using hydrometallurgy.

Some leaching techniques use an acid solution to extract the copper ore, while others use naturally-occurring bacteria to turn the sulfur into sulphuric acid.

Most hydrometallurgy approaches end with a process called “electrowinning,” in which electrified anodes are introduced into the leach solution in order to extract the metal.

Today, copper mines produce up to 9 million tons of copper every year, with most of the biggest mines found Peru and Chile. One of the largest mines in the U.S., the Bingham Canyon Mine in Utah, has been operating since 1903 and is open 24 hours a day, every day of the year.

Copper is also relatively easy to recycle, and refined scrap metal left over from manufacturing or from previously used products accounts for up to 17% of copper production. (This explains why copper is such a common target for theives, who can resell it for a profit).

Of course, once of copper’s most unique properties is its electrical conductivity, and it has been a key component of many telecommunications devices, from the telegraph to the telephone.

The first Transatlantic telegraph cable was completed in 1858, and was made of seven copper wires surrounded by gutta-percha — a natural latex made from tree sap — and tarred hemp. It required up to 2,500 miles of cable, weighing 107 pounds per mile.

The first few attempts to lay the cable ended in disaster when the cable broke mid-trip. Eventually, the mission succeed, with two ships, each carrying around half of the cable, met in the middle of the Atlantic Ocean and spliced the ends of the cable together. For the first time, Europe and America could communicate by telegraph.

Copper was also used in some of the first electromagnetic experiments, performed by Alessandro Volta, Michael Faraday, and other scientists in the 18th and 19th centuries.

Early experiments used copper discs and coils, but eventually it was discovered that copper was an ideal transmitter of electricity for a wide range of appliances.

Some historic homes still contain elements of this system, but from the 1920s onward, most homes were wired with flexible armored cable or sheathed cable, both of which contain copper wire.

Why copper? Although silver is slightly more conductive, it’s too expensive to be used widely. And while aluminium is used in some cases, it’s only 61% as conductive, and it needs to be much thicker that copper in order to carry the same amount of current.

Copper also has a role to play in modern computing technologies. While we’ve come to associate computers with silicon, copper is used as a semiconductor in many hardware components.

Because it conducts heat so well, it can prevent computer chips from overheating more effectively than aluminum and other metals.

And because copper can block some kinds of electromagnetic rays, it makes a great shield. It’s used to protect the RFID technology on your credit cards, as well as X-ray and MRI machines, and other medical equipment. The NSA even uses a copper shield to protect its headquarters in Maryland and prevent unathorized signals from getting in or out!

Today’s computer programmers may not have much in common with yesterday’s coppersmiths, but they rely on exactly the same metal to do their job.

In summary, the first copper made objects were decorative, mainly because copper is easy to shape and attractive. They include rings, bracelets, earrings, combs, broaches and mirrors which have been discovered from ancient cultures of India, Rome, Peru and China. These types of articles are still made up to now and are readily sold in the market across the world.

Some early cultures realized that Bronze was easier to melt, and could be cast into numerous shapes. In addition, it could easily be hardened by working the metal. So, they started using it in manufacture of new tools such as knives, chisels, bowls, and axes.  These were by far more effective compared to their stone or clay counterparts.

Lastly, in the modern times, copper electrical capabilities have dominated its use. In fact, 60% of copper extracted is used in electrical and electronics goods. Copper also exhibits antibacterial properties that make it popular in manufacture of copper cookware & copper sinks.

Modern trends continue to point to copper being both for utility, and decor. You'll find it's being commonly used for chimney caps, fire pits, siding, roofing & copper cupolas.